No matter who you are, or where you are on life's journey, You Are Welcome Here.

Sunday Worship at 10am
Directions

In the halls of justice, there is art. Actually, there are murals. Sixty-eight of them to be exact, painted on the walls of the United States Department of Justice between 1935 and 1941.

The American dream of liberty and justice for all is a noble one; however as Christians, we dream of something more. We aspire to God’s dream of a peaceable kingdom, * a society in which “natural” enemies shall live together, eat together, rest and be together.5 * We aspire to a world where all will be filled with God’s spirit, God’s peace, God’s love, where people shall care for one another and creation, and neither shall there be war no more. We dream of God’s kin-dom.

When Jesus spoke about the kingdom of God, when he prayed God’s kingdom come, Jesus was making a political statement, and having no alternative word, Jesus used one that would invite his listeners to compare how Rome ruled and how God reigns. Jesus was telling his audience that “God’s reign through Jesus is radically upside down from Caesar’s”.6

And a little child shall lead them. As we await the Christ child, the Prince of Peace, we hear these words and think of Jesus. Isaiah’s words certainly fit Jesus. He was descended from the house of King David, a branch of Jesse’s family tree. The spirit of the Lord rested upon him and Jesus not only knew God, Jesus delighted in the fear, the awe of the Lord. He did not judge by what his eyes saw or decide by what his ears heard. Jesus did not make decisions based on what society said or thought; he made them based upon God’s unconditional love for each person.

With righteousness, Jesus advocated for the meek and the poor. With righteousness, he put to death the ways of the wicked, upended the political structures that favored the rich and mighty, and challenged what the powers that be called peace.

When Jesus’ kingdom comes, it will not look like any government or kingdom of this world, it will be a kin-dom, a place where all people and all of creation are cared for and live in relationship. It will be a place of justice, of righteousness, and thus peace.

As Christians, we wait for the Christ child to lead us; however other children of God are following Christ’s ways, leading us into the peaceable kin-dom. *In 1960, six-year old Ruby Bridges led us toward the peaceable kin-dom7. In 2012, it was fifteen-year old Malala, as she spoke out against the Taliban and spoke up for the education of women. In this last year, it has been the students of Marjorie Stoneman Douglas high school as they have spoken out against gun violence, and students, like Greta Thunberg, of the Youth Strike for Climate movement.

In 1834, Edward Hicks envisioned that God’s peaceable kingdom looked like this. In 1935, George Biddle painted this vision, and in 1961, Norman Rockwell painted this.8

What do you think God’s peaceable kingdom looks like? Like one of the paintings I shared this morning? Like the vision championed by Ruby, Malala or Greta?

What does God’s peaceable kingdom look like to you? And how are you helping to create it?

I invite you to find one or two other people and share with them your answer to these questions:

What does God’s peaceable kingdom look like to you?

And how are you helping to create it?

(6) From Kingdom to Kin-dom—and Beyond, Reta Halteman Finger, eewc.com/kingdom-kindom-beyond/) 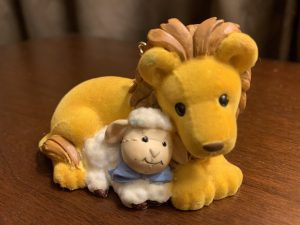 Worship at 10am on Sundays