No matter who you are, or where you are on life's journey, You Are Welcome Here.

Sunday Worship at 10am
Directions

Our Past, Present and Future Church School classes began in 1818 when with the separation of Church and State, ministers could no longer teach religious education in the public schools.

In 1883, an addition was built on the south side of the church to accommodate the growing ministries of the congregation.  This addition was torn down in 1910 to make way for the present Parish House, which was dedicated in 1914.  The Lena Forbes Barnes Memorial Chapel was dedicated in 1951, adding another wonderful worship space to the church building as well as much needed classroom space.  In the 1970’s, the basketball gym in the Parish House was converted into two floors, adding more classroom space. 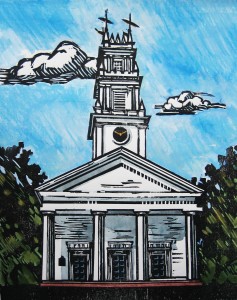 In 1960, church members voted to become affiliated with the United Church of Christ, a Protestant denomination formed in 1957 by the union of the Congregational Christian Churches and the Evangelical and Reformed Church.  The Connecticut Conference of the UCC is made up of about 267 churches.

Following a successful capital campaign in 2015, FCC broke ground on the United in Ministry Safety and Accessibility renovation in the summer of 2016, which was finished in September 2017.  The new atrium, back entrance with an accessibility ramp, elevator, and fire code stairwell welcome all people in Christ’s love.

Our world and Christ’s church continue to change and the First Congregational Church community continues to listen to God’s still speaking voice as we partner with God in this “new thing” God is doing. (Isaiah 43:19)

Worship at 10am on Sundays